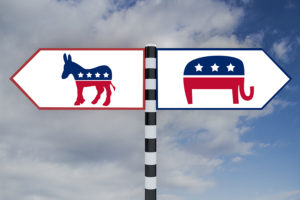 This is perhaps the most important election in America’s history. However, what many voters don’t realize is that much more than the presidency is at stake, with the very makeup of the Senate hanging in the balance. Currently, the Senate consists of 54 Republicans, 44 Democrats and two independents, but with 34 seats up for grabs in this election cycle, the power dynamic in the Senate could be radically different after the ballots are cast and the votes are tallied. Keep reading to learn about political races that may change the dynamics of the Senate, and learn why you should join the Nevada Republican Men’s Club.

A Showdown in Florida

When his presidential hopes ended, Sen. Marco Rubio turned his sights to winning re-election for his Senate seat. Although he has recently won the Republican primary, political insiders view his chances at re-election at dead even, meaning he must run an aggressive campaign over the next two months if he hopes to defeat challenger, Democratic Representative Patrick Murphy.

As Democrats only need to gain just five seats to take control of the Senate, this is one of the most important races in the entire country.

A Battleground State at All Levels

Ohio is one of the most important states in the entire country when it comes to elections. This year’s fiercest political battle in the Buckeye state will focus on the Senate race between Sen. Rob Portman (R) and Ted Strickland, a former Democratic Ohio governor. Portman, a solidly conservative voice, is squarely ahead at this point in the race, but anything can happen in a topsy-turvy election year like this one.

Pennsylvania: A Conservative Seat in Peril

Another battleground state, the Senate race in Pennsylvania is looking to be closely contested, just as it was in 2010. Current pooling shows Sen. Pat Toomey trailing his opponent Katie McGinty, which means he’ll have to rally his conservative supporters if he wants to avoid losing his re-election bid. More than perhaps any other state, the Senate race in Pennsylvania may be an indicator of other important races across the country and should be watched very closely.

We come to another one of the most crucial races across the country, and one of the best opportunities for Republicans to maintain control of the Senate. After weathering numerous political storms over previous election cycles, Sen. Harry Reid’s (D) seat is more vulnerable than ever before. Representative Joe Heck has a good shot a flipping this seat for a major conservative victory, and he deserves the support of Republicans across the state of Nevada.

With the Presidency and perhaps the very future of the country at stake, it is easy to lose focus on the important down ballot races. However, especially in our state of Nevada, this year’s Senate races cannot be ignored, as control of the Senate, and the direction of the country, is up for grabs. To fight for a Republican Senate and the principles that made America great, join the Nevada Republican Men’s Club today.

By joining, you’ll be showing your commitment to conservative values and conservative candidates across the country. Contact us today for more information and learn how you can help.