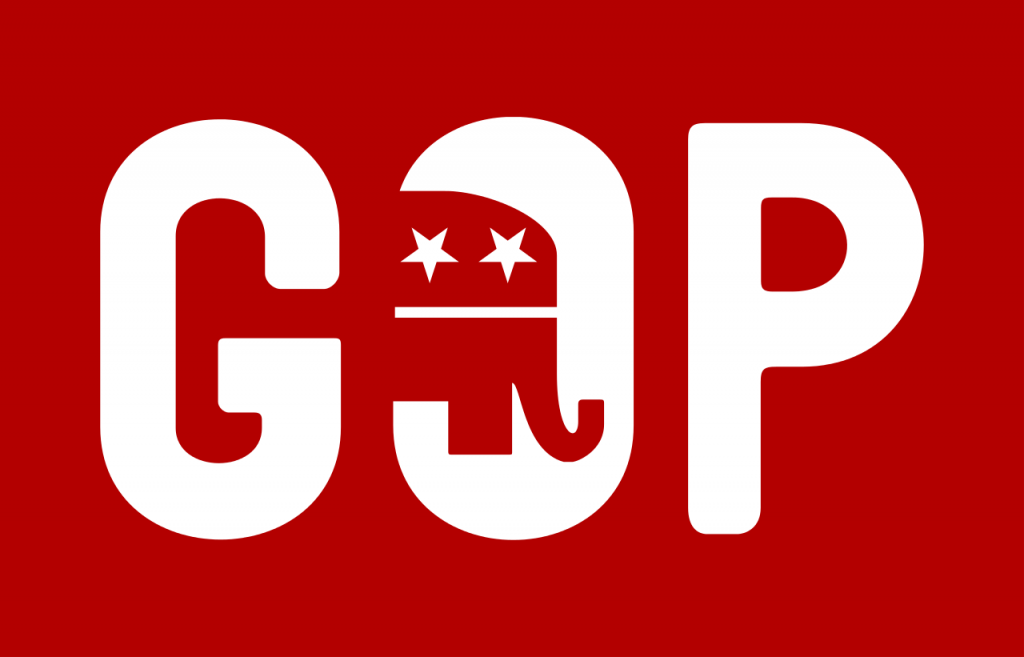 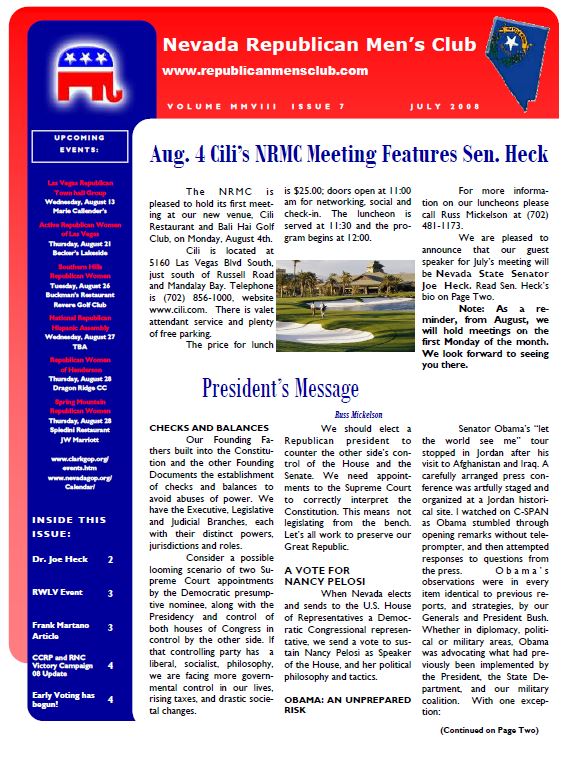 The Nevada Republican Club was started in 1981 as The Nevada Republican Men’s Club by Michael Schaefer, a San Diego City Councilman who moved to Las Vegas in 1973. Schaefer discovered there was no conservative club for men here in Las Vegas, so he worked with Jane Hamm and together they sent out printed invitations to about 100 Republican men and asked them to join together. Jim Marsh and about 20 others responded, and their first luncheon meeting was held at noon at the Royal Las Vegas on Convention Center Drive, in what was then the Berrymore Restaurant. Oran Gragson, the longest-serving mayor of Las Vegas and small business owner, was their first guest speaker.

Since, at that time, there was a Republican Women’s Club, they decided to name the club the Nevada Republican Men’s Club. The initial group of 20 members started the club as a forum not only to educate the populace on conservative politics but also to provide conservative political candidates an opportunity to hone their speaking talents among those who were friendly and faithful. Their monthly luncheon meetings featured guest speakers who were local and statewide Republican candidates, elected officials, and others throughout the Nevada business community.

The tradition took hold and membership in the Nevada Republican Men’s Club grew, with membership dues initially set at $10 a year. They remained at the same low price for about 20 years, when they were increased to $20 per year in 1991. Due to rising costs membership dues were raised again around 2005 to $25 and have been $25 a year since.

In 2003 the club held luncheon meetings at the Ellis Island Casino on Koval Lane in Las Vegas.  In 2008, the board was notified they would have to find a new location since the banquet facilities where they met were to be remodeled to make room for a new sports book.  After trying a few luncheons at the Hofbrauhaus and Landry’s Steakhouse, we discovered Cili Restaurant.

In 2014, the Club added a First Friday Happy Hour event, initially joined with political commentator Chuck Muth, and found a home at Cops Room at The Bootlegger Bistro. These informal get-togethers provided a more relaxed atmosphere for club members to meet and a forum for candidates to speak with conservative voters. Due to rising costs, in 2019, The First Friday Happy Hour has been discontinued. However, the Club still hosts quarterly social opportunities for its members to get together informally.

Now, years later, The Nevada Republican Club is still following the mission established by Michael Schaefer, Jane Hamm and Jim Marsh: to educate individuals living in the Las Vegas Valley about all things conservative. The club has grown to a membership of over 600 and still continues to meet monthly for luncheons at noon with guest speakers who discuss conservative politics and all things related to American exceptionalism.

Due to the Covid-19 restrictions, luncheon meetings were moved from Cili Restaurant to the Ahern Hotel & Convention Center. As always, time is set aside before each meeting for business networking. 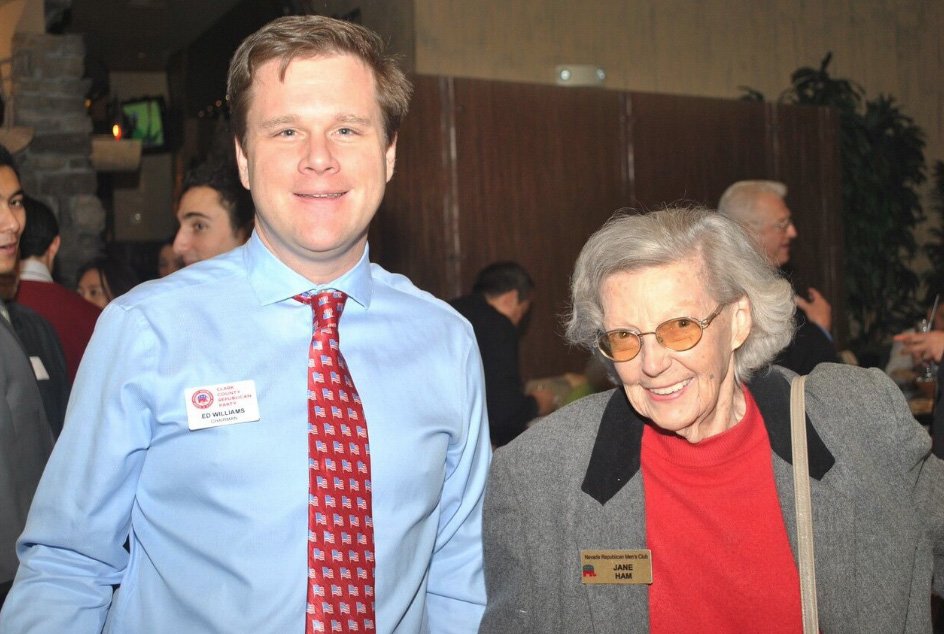 Jane Hamm, pictured right, was involved with the founding of the club in 1981. She was a politician in Nevada and still attends our luncheons from time to time. She is pictured here at our January 2016 luncheon with Ed Williams. 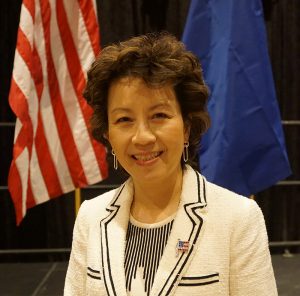 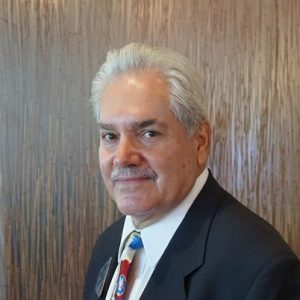 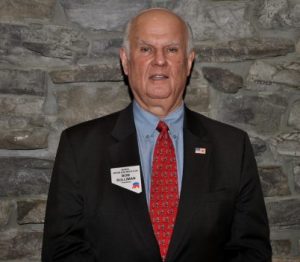 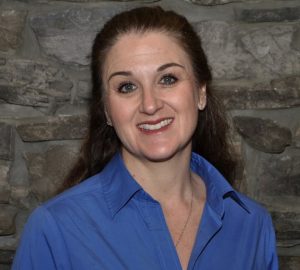 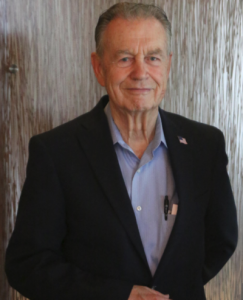 Russ Mickelson led the team in 2008 and Frank Martano, Jim Marsh, Dr. Chris Comfort and Mike Mazur assisted as members of the Board of Directors. The club didn’t have a website at the time, but the board prepared a monthly printed newsletter that was mailed to members. Russ would write the newsletter, which also sometimes included a conservative commentary from Frank Martano, and then the staff at Mike Mazur’s office would help with typing and photo copying. Each of the 400+ members received copies of the newsletter and Frank Martano would distribute additional copies to Las Vegas area libraries. The board held their monthly board meetings most often at the Denny’s Restaurant on Maryland Parkway, across from Sunrise Hospital. Russ Mickelson served in the United States Air Force for 28 years. He then worked as a Test Site Contractor and with other small businesses. He now is an Adjunct Professor at the College of Southern Nevada. He still attends our luncheons. 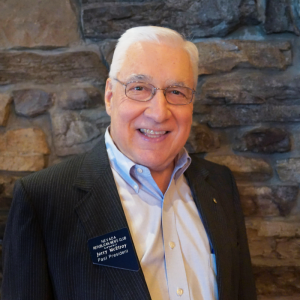 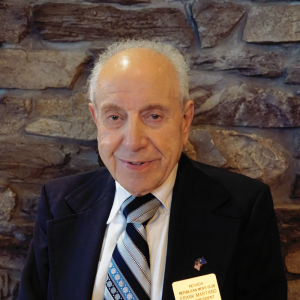 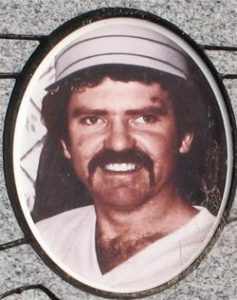 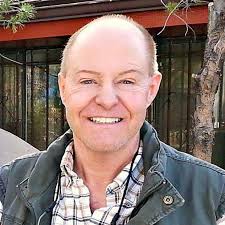 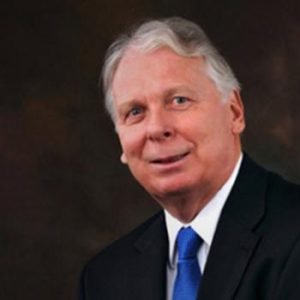