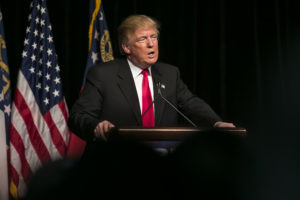 In 2016, conservatives across the country accomplished what many thought was impossible and elected Donald J. Trump as our next president. Now that the election is over and the dust has settled, it’s time to look forward to the future and what President Trump can do to increase economic freedom and to improve the country.

One of the main goals of the Nevada Republican Party is to increase economic freedom, and this is reflected in their platform in calls for lower taxes and the elimination of onerous regulations. Fortunately, the economic goals of the Trump presidency match up perfectly with the Nevada GOP platform in this regard.

President Trump is committed to providing one of the largest tax cuts in American history, giving citizens back the money that is rightfully theirs and increasing their spending power. Additionally, the Trump presidency will be focused on removing American businesses from the burdensome regulations that come from free trade deals like NAFTA.

A main plank of the Nevada GOP platform is the improvement of education, and this is another area where President Trump’s plans reflect the wishes of conservatives everywhere. It’s clear that public education has been an unmitigated disaster, failing to prepare students and often hindering their development.

Educational reform is vital in the country’s future and it’s clear by Trump’s appointment of Betsy DeVos as Secretary of Education that our next president agrees. Under DeVos’s direction, we can expect a renewed focus on successful charter schools and a complete overhauling of the failed public education system. In addition, a Trump presidency will finally allow parents to choose their child’s educational path without government interference.

There are a few other areas worthy of note where the goals of the Nevada GOP platform will be reflected in a Trump presidency.

Over the next eight years, Nevada Republicans can expect to see a majority of their platform implemented by the Trump presidency, returning our country to its founding principles and reinvigorating the American dream. If you want to be a part of America’s bright future, you should work for conservative policies by joining the Nevada Republican Men’s Club.

Now that we’ve elected President Trump, the Nevada Republican Men’s Club will work to ensure he upholds his promises and truly does make America great again. Learn more today about how you can help our cause.