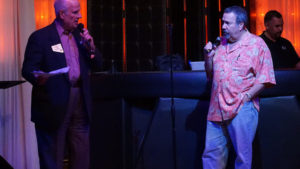 First Friday is always held in the beautiful Copa Room at the Bootlegger Italian Bistro conveniently located on the South Strip at 7700 Las Vegas Boulevard. The event is from 5:00 p.m. until 7:00 p.m. and includes all you can eat appetizers along with a “no-host” bar. The appetizers are deliciously prepared by the Bootlegger Italian Bistro and may include such tempting items as “Italian Chicken Satays,” “Mama Maria’s Meatballs,” “Penne with Rose Sauce” and pizza. The Copa Room has the classic Las Vegas Showroom atmosphere with plush seating, a fully stocked bar and a stage for performers.

Every month, First Friday has guest speakers varying from politicians who hold office, politicians seeking office or other prominent republicans in the community. Recently, Alan Stock, KXNT radio host known as the “Voice of Common Sense” was the guest speaker. Alan Stock remotely broadcasted his daily 3:00 p.m. to 6:00 p.m. radio show live from First Friday. After his show he stayed to mingle with members and returned to the stage with the President of Citizen Outreach Chuck Muth to toast what is great about America.

In between activities on stage, the attendees use this time to network with Republican Men’s Club members while enjoying cocktails and appetizers. It is especially a great opportunity to get to know Republican candidates for office and for the candidates to stump for support from the membership.

Anyone interested in joining the Nevada Republican Men’s Club is welcome to come to the Bootlegger’s Copa room for First Friday Happy Hour. Membership is not required and again, women are a large part of the group’s membership. The cost for the evening is only $10.00 and you can pre-register at Eventbrite.